The Link Between Autism and Sleep Issues: Relationship Explained In Detail

Children and adults with autism, a condition also known as the Autism Spectrum Disorder (ASD) are known to experience sleep issues at a higher rate than the rest of the population. The relation between specific behavioral problems, sleep problems, and ASD has been evaluated in numerous studies, showing a direct causative link between the mentioned conditions. However, the positive correlation between autism and sleep issues still requires comprehensive behavioral insight, since these issues do arise at a personalized level for each individual with ASD. The severity of sleep issues can vary, often depending on the severity and range of this spectrum disorder.

Nevertheless, regardless of the type of ASD or the severity of the sleep issues, sleep problems are probably the most important and urgent of concerns, for both parents, children, or adults with ASD. For families that are grappling with autism, or for the ASD individuals, it can be really hard to comprehend the direct link between sleep and autism, sometimes leaving the issue untreated. The most common conception is that sleep problems are symptomatic when it comes to autism and that they can be regulated with ASD medication. However, sleeping issues are rather the results of autism, which can be treated separately.

People usually have preconceived conceptions when it comes to autism and all the conditions it can cause. Therefore, it is highly important to raise awareness regarding the real sleep struggle ASD individuals experience on a regular basis. Therefore, in the following paragraphs, we will take a look at the autism spectrum disorder in-depth, as well as into its direct link to sleep issues in children and adults.

What is Autism Spectrum Disorder? 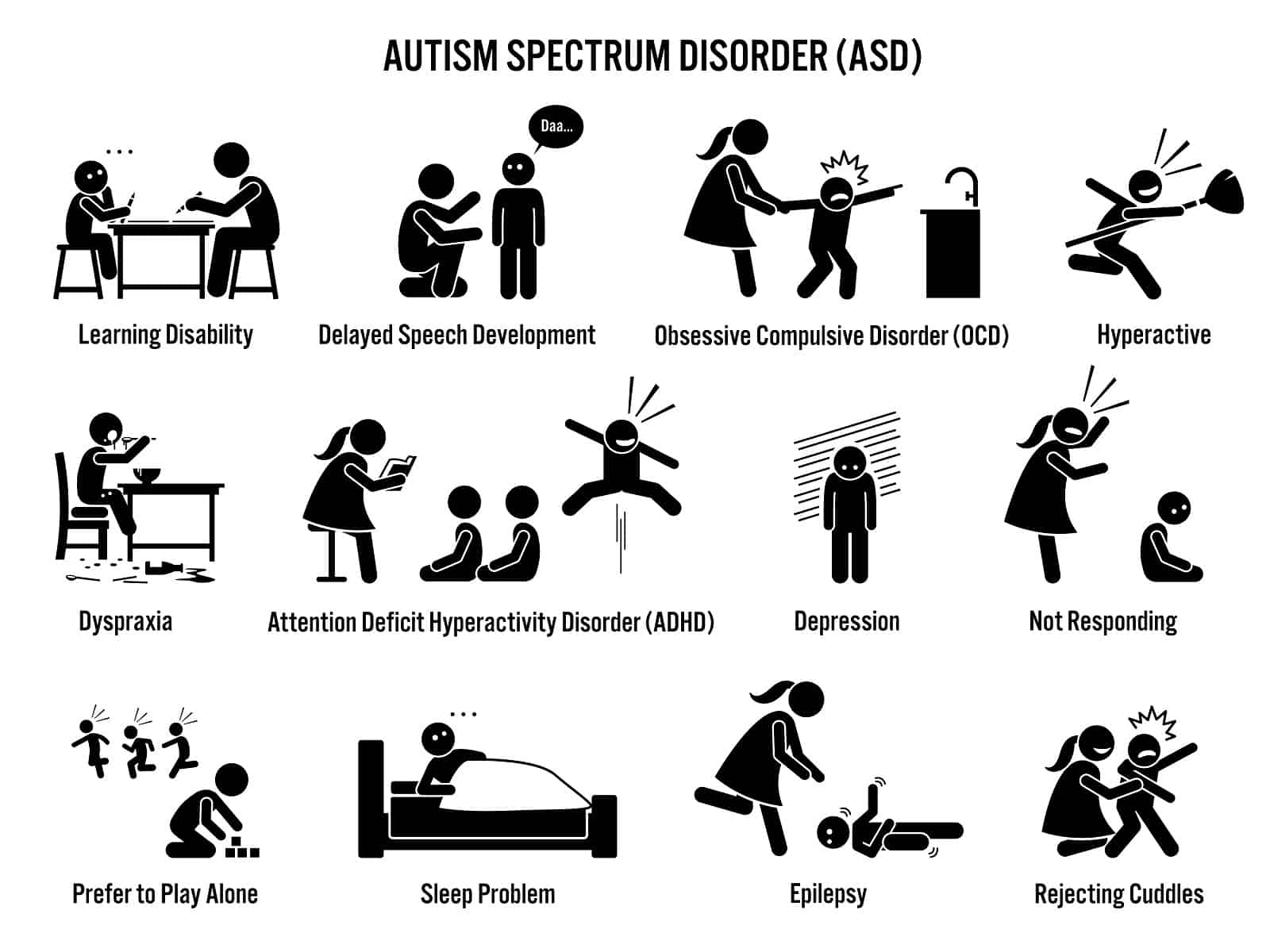 Autism Spectrum Disorder (ASD) is a neurodevelopment disorder which is usually characterized as individuals, children or adults experiencing impairments in the communicative association, social interactions and having restricted, or repetitive behaviors. These impairments can be referred to as deficits, which are persistent and occur in different situations or multiple occasions. According to the American Psychiatric Association, ASD can be diagnosed as early as at the age of 2-3, which doesn’t imply that these children go through an untypical development through childhood. Most of them start showing off a more visible symptomatic behavior later in childhood, depending on the type and severity of ASD. Nevertheless, 1 in 59 children are being diagnosed with ASD, and the disorder is more likely to appear in boys rather than girls.

The American Psychiatric Association has also established a diagnostic list which provides a detailed symptom range that characterizes the Autism Spectrum Disorder. Here are some of the characteristics that can appear in children and adults:

These impairments or deficits can be described as one’s inability to lead a regular to-and-fro conversation or to show interest in leading one. Moreover, the deficits may include the inability to understand the emotional outcomes of a conversation or to respond to social cues. Eye contact or facial expression don’t seem to be a matter of interest for individuals with ASD, nor any type of development or maintaining of relationships with other people.

Individuals with ASD usually experience difficulties when it comes to typical behavior, for example, basic interaction with others or making friends. They also usually avoid making eye contact, as mentioned before or they have difficulties understanding others’ feelings, attitudes, intentions, and exhibit an overall lack of social reciprocity.

These behavior patterns include, for example, speaking in a unique way, adding a pitch to the voice, repeating certain words or coming up with new word meaning and its connection to the real world, obsessive tendencies towards daily routine, and the structure of a day, etc. Individuals with ASD are also known to have exceptional sensory abilities, as they can ascribe uncommon perceptions to the regular aspects of life. For example, their ability to smell, hear, or see goes beyond the ability of regular individuals. They are also fascinated with the most mundane things, like toys, light movement, types of music, etc.

When it comes to ASD and its typology, the American Psychiatric Association has determined the three main severity levels of autism, which include:

Autism is usually characterized by maladaptive behavior on a day-to-day basis, which is caused by cognitive delays in regular or higher mental functions. These functions typically include abstract thinking, verbal fluency, association-based learning, and information gathering. However, there are over 60 established symptoms and early signs of autism. Usually, when diagnosing autism, medical professionals follow an autism symptoms checklist, which monitors over 60 signs of autism for children and adults. Some of them are:

Once the observation is complete, the medical professional studies the results of the checklist. If around 40% of the symptoms are present, an adult, or usually a child is not necessarily diagnosed with autism right away. The individual is monitored for some time, put on a certain mediation, and if the symptoms do not improve, then the individual is diagnosed with ASD. 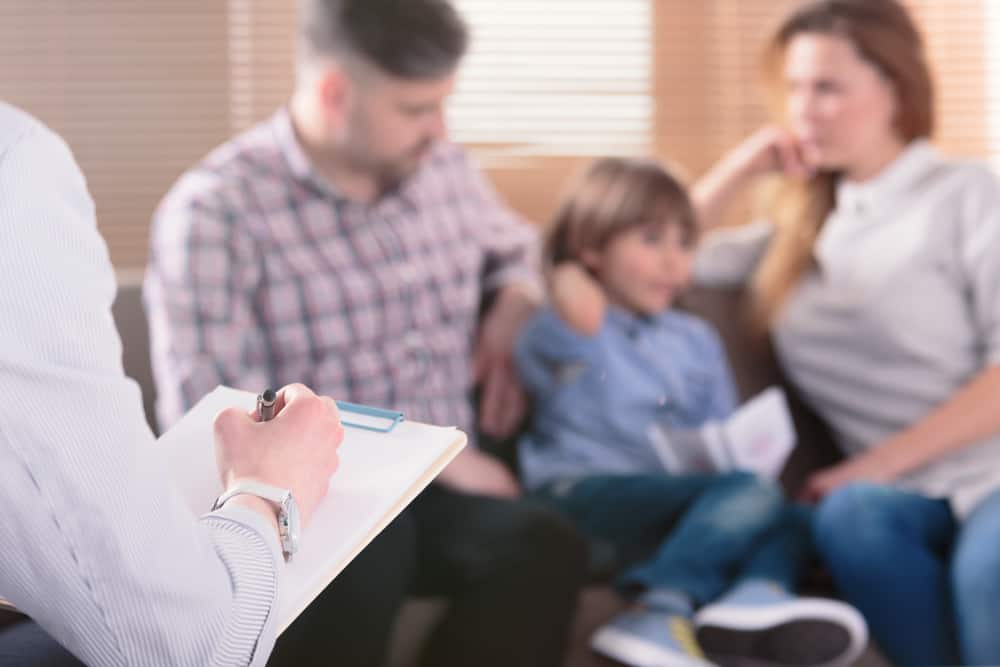 Studies have shown that around 40% to 80% of individuals with ASD struggle with sleep problems. Because autism comes with a number of behavioral problems, there are around 70 sleep disorders that can affect ASD individuals, ranging from insomnia, sleep-related breathing and movement disorders, dysomnia, parasomnia, etc. The sleeping problems usually appear in developing children (4 to 10 years old) at a rate of 25%, and in adults at a rate of 70%. Age seems to be an important predictor in ASD children and adults experiencing sleep problems, anxiety, bedtime resistance with children, problems with sleep-onset, sleep duration, and daytime sleepiness. Prevalence of sleep problems in ASD individuals also seems to stem from a range of underlying medical conditions, they include epilepsy, other seizure disorders, followed by episodes of sleep deprivation and insomnia. Therefore, sleep issues linked to ASD can be categorized as follows:

Because there are so many symptoms and sleep issues linked to ASD, the etiology and the direct link, however, still remains unclear. The cause or the source of the sleep problems are rather multifactorial, taking into consideration all kinds of factors; biological, psychological, social or environmental. Medical conditions, like attention-deficit-hyperactivity disorder (ADHD) can also promote the development of ASD, as well as the accompanying sleep disturbance, epilepsy, gastrointestinal problems, and mental illnesses. The connection between sleep issues and ASD has also been recognized in a possible presence of two chronic diseases, usually including psychiatric diseases, like pathological/chronic anxiety and depression. 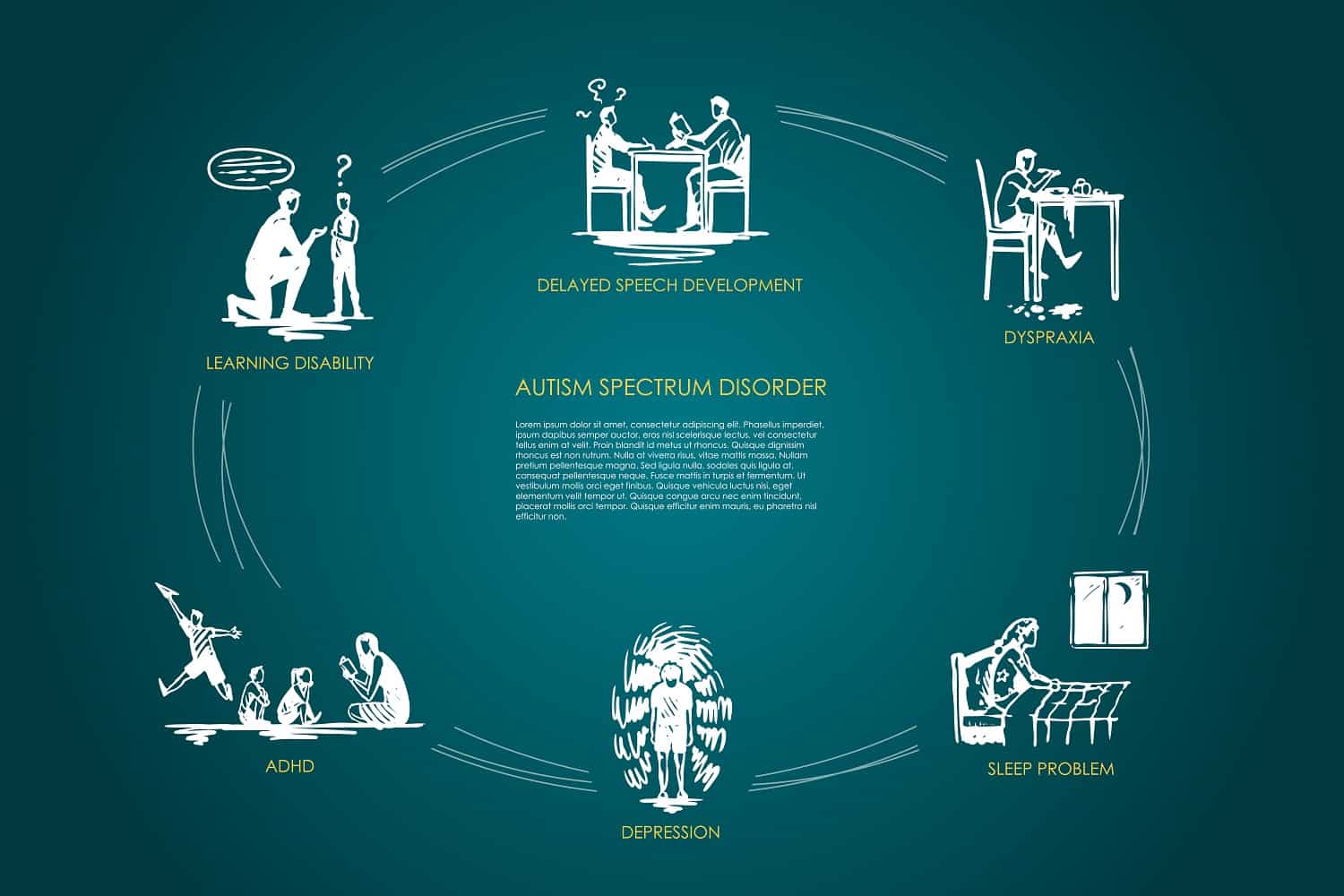 All of the aforementioned physical and mental conditions cause somatic and cognitive hyperarousal in ASD individuals, which usually stem from restlessness, rumination, distress, onset of negative thoughts, etc. Consequentially, because ASD individuals are prone to control and routine obsession, they develop a system in which they can deal with sleep issues. This can also be a huge problem as any possible discrepancy in the established routine, such as spontaneous falling asleep and awakening, can cause sleep anxiety and other anxiety disorders, furthering the sleep problems.

It has also been established that individuals with ASD also suffer from a circadian-rhythm disturbance. The circadian rhythm is responsible for the sleep-wake cycle, which can be hard to synchronize for ASD individuals. People with autism simply have trouble aligning the day with the wake cycle, and the night with the sleep cycle. Their need to sleep, if there is any, does not mirror the environmental and natural rhythms, which then cause sleep problems. Not to mention that ASD individuals usually suffer from low melatonin levels, also known as the darkness hormone, which regulates the circadian rhythm. However, all of these issues are personalized when it comes to individuals with autism.

The manifestation of symptoms, age, and demographics, all affect the ways ASD is going to interact with one’ sleep pattern, routine or problems; that is why there are so many inconsistencies in ASD-sleep relation studies. Nonetheless, disturbance of routine, the onset of depressive or anxiety episodes as well as the disturbance of circadian rhythm and melatonin levels are the established links between sleep issues and ASD in the majority of children and individuals. Here are some of the ways ASD actually affects the sleeping patterns in children and adults;

Autism Spectrum Disorder is rather complex, as it involves a variety of possible causes, influencing factors, symptoms, and types. Because it is so interconnected with other conditions, or directly causes them, it is also essential to establish a link between sleep disturbances, cognition and its effects of daily life for ASD individuals. It is well known that sleeping plays an indispensable role in cognition. Therefore, some studies have looked into the connection between sleep, cognition, and the ability to function normally and practically in the immediate environment.

Children with ASD, for example, usually showcase sleep disturbances due to the lower intelligence, and overall poor cognitive abilities; verbal and non-verbal impairments, behavioral deficits and lack of motor development.  These seem to be connected, especially in ASD children, and sometimes in adults, who then experience prolonged sleep latency, irregular or disturbed sleep-wake cycle, rapid-eye-movement irregularities, as well as poor eye-hand coordination and shorter sleep periods.

However, when it comes to young adults, and adults in general who have autism, they usually have normal intelligence levels. The regular IQ definitely affects their advanced attention spans, but still, they surely have impaired performance when it comes to cognitive memory processes, sensory motoric, nonverbal abilities and the overall autistic symptomatology, which is directly connected to sleep disturbances. All of this also affects their ability to learn, undergo memory tasks, perform well in school, college, or work.

Even though it can be really difficult to deal with ASD, alongside sleep issues, there are many ways ASD individuals can promote positive and healthy sleep patterns. These can be achieved by appropriate and personalized lifestyle changes, as much as the ASD routine-obsession allows, of course. That is why the following suggestions are minimally invasive and relatively easy to adopt. 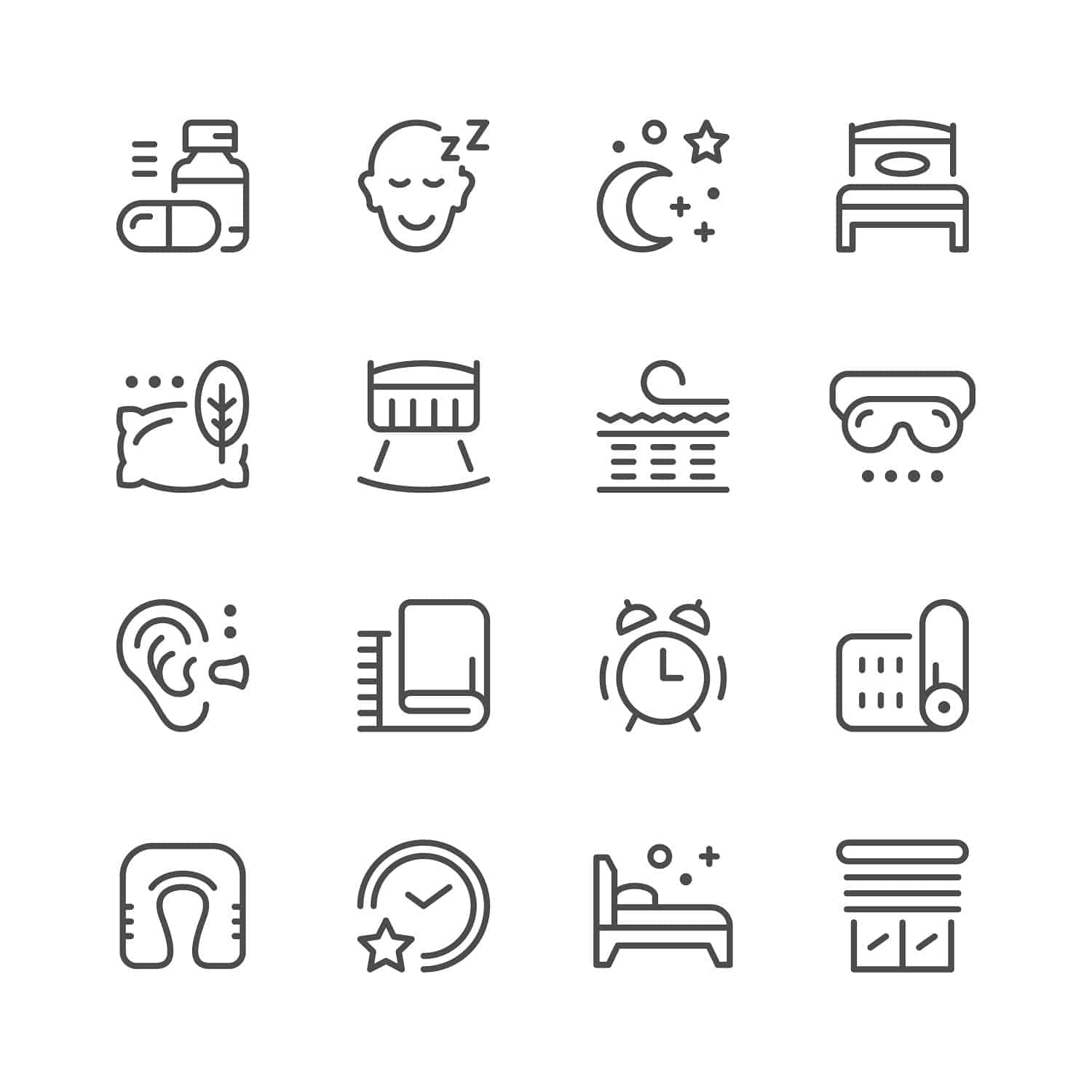 For a good night’s sleep, regardless of whether an individual has ASD or not, it is essential to establish good sleep hygiene. Because ASD individuals project problematic behavior during the day and night, it can be difficult to establish a completely new routine, but by taking small steps, it is doable. For example, start with:

Some of the following behavioral and lifestyle changes have proven to be quite successful in helping ASD individuals establish regular sleep patterns:

Autism Spectrum Disorder is rather tricky, especially when paired with sleep difficulties. Nevertheless, the sleep issues related to ASD can be treated, or at least alleviated via medical treatment, lifestyle, and behavior changes. Sure enough, it will take time for an ASD individual to establish a healthy, positive sleeping routine, but in the long run, it is worth it. By establishing a good night’s sleep, ASD individuals can avoid developing sleep-related conditions, which could help them deal with autism much better. Hopefully, this article has provided useful information and suggestions. After all, everyone needs care and love for the betterment of one’s well-being, so why not try and implement changes that are for the better