Most of us love sleep. Whether it is in the weekends or napping, sleep has always been considered a luxury. If you tend to sleep longer than usual (7-9 hours a day), then you might be a long sleeper. There are on the other hand those people who do not need much sleep, like night owls; these people find it difficult to sleep during the night and stay awake longer. On the contrary, they prefer to go to bed late or even before dawn, and sleep during the day. Which category do you belong to?

What is it really that makes our sleep and wake patterns different? Is it a lifestyle routine or is it something else?

If you are curious to know what it is in the body that makes you want to sleep or wake up, then this article could be of interest.

One thing for sure, our different sleep-wake patterns are not left in random by nature. There is indeed a dedicated place in the brain called the suprachiasmatic nucleus (SCN) which controls different body patterns such as temperature, metabolism, and even hormone release. Read on to know more about how it affects sleep and what happens if it gets damaged.

Similar to the clocks we have to tell the time, living organism possess an internal biological clock or circadian peacemaker, which is called the circadian rhythm.

Circadian rhythms are the biological patterns closer to the Earth’s 24 hour cycle, helping our bodies to adjust in day and night, otherwise stated as sleep-wake cycle.

The term “circadian” has its origin in the Latin words for about (circa) and day (diem).

These circadian rhythms learn to comply with the environment through external cues called Zeitgebers -this means “time-givers” in German- and the critical external cue is the light-dark cycle.

Timed internal processes happening with direct influence of the circadian clock include:

The circadian clock is located in the hypothalamus area of the basal forebrain and uses the Zeitgebers to synchronize itself with just minutes away from the 24-hour rotation cycle of the Earth.

The first research evidence from the 1960s and 1970s suggested that the circadian period for humans was approximately 25 hours. Nevertheless, it was later discovered by scientists that these experiments were wrong and misleading.

Some people who leave in the northern countries, have developed other Zeitgebers like meal times, lighting, and alarms as these are more important to maintain a normal as possible routine in periods of long darkness or winter.

Our internal clock and how it works:

Why do new-borns have irregular sleep patterns?

It is quite common for new born babies to follow a very irregular sleep-wake pattern as it takes time for their circadian rhythms to grow and adjust fully.

Usually, this happens somewhere between 3-6 months of age and you can enjoy a more close to normal pattern.

As already explain in detail, the body therefore has a master clock itself. Scientists identified that the specific nucleus which controls the timing of circadian rhythms in order to work properly, is found in the part of the brain called the suprachiasmatic nuclei (SCN) in the hypothalamus.

There are approximately 10,000 neurons in each suprachiasmatic nucleus.  You will find this pinhead-sized area on each side of the third ventricle, in a shallow impression over the optic chiasm. 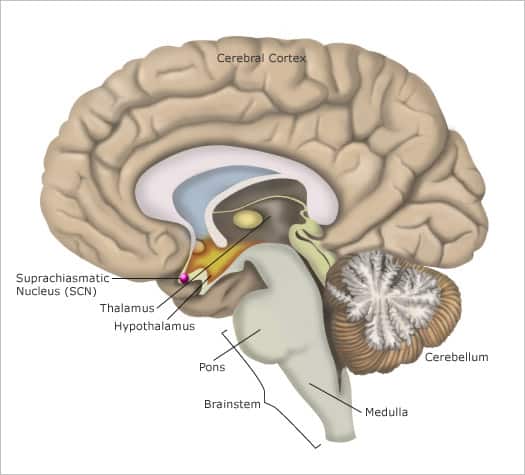 The place where it is located, gives the name to the structure: supra means above and chiasmatic is after the close distance to the optic chiasm. Due to the fact that the neurons extend from each eye to the brain cross, the circadian rhythm is greatly affected by light, although it can function without it as already stated in the previous section.

Scientists found that the 20,000 neurons from which the SCN consists, have an almost 24 hour rhythm of activity. This implies that the clock function acts at a sub-cellular level. When acting on their own, these cells have distinct 24 hour rhythms, whereas under the influence of the SCN, the work synchronized.

We stay awake by functions in two systems of neurons, which are displayed in the figure above in green and red.

The red pathway is located in the forebrain. The forebrain center supplies the cerebral cortex.

When these two centers are activated, they result in quick eye movement sleep.

We wake up on the other hand once other neurons that create the neurotransmitters norepinephrine, serotonin and histamine are activated.

This is our 2 cents of Neuroscience via this short video:

The SCN is responsible for the following functions in the body:

The SCN can produce rhythmic chemical signals and is thought to regulate the aforementioned functions and synchronize internal clocks throughout the body. However, there are other local gene clocks independent of the influence of SCN in areas such as the liver, the muscles and connective tissues.

You can find a great example of a local clock in fruit flies. The cells in their antennae have an independent circadian rhythm in comparison to the brain. These antennae oscillations relate more to the sense of smell, which is more sensitive during the evening. 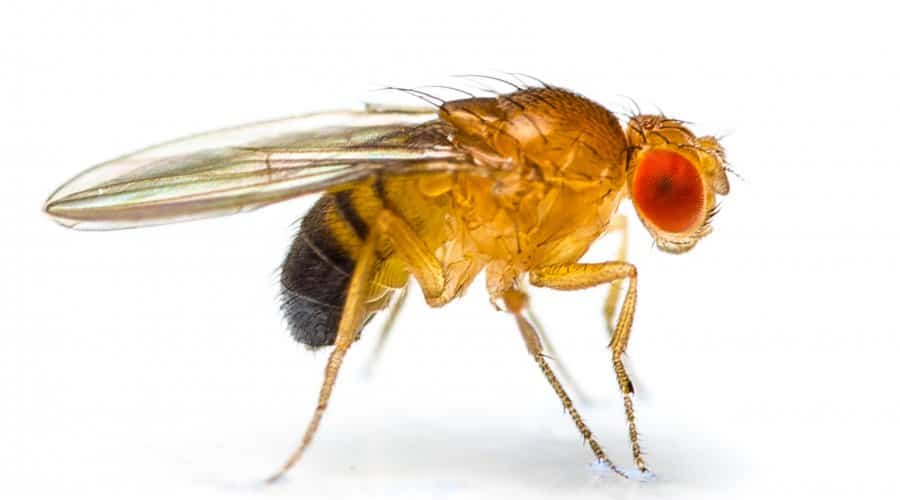 The role of suprachiasmatic nucleus and circadian rhythms in sleep

The way our master clock functions is primarily through light exposure. As the figure below shows, when a person is exposed to natural daylight, there is a process taking place which stimulates a series of nerve reactions.

In particular, there are certain photoreceptive ganglion cells in the retina of the eye, which consist of a specific pigment called melanopsin. A specific connection named retinohypothalamic tract reaches the anterior hypothalamus, the area in which the SCN lays. Melanopsin is light-sensitive and even detects “blue light”. 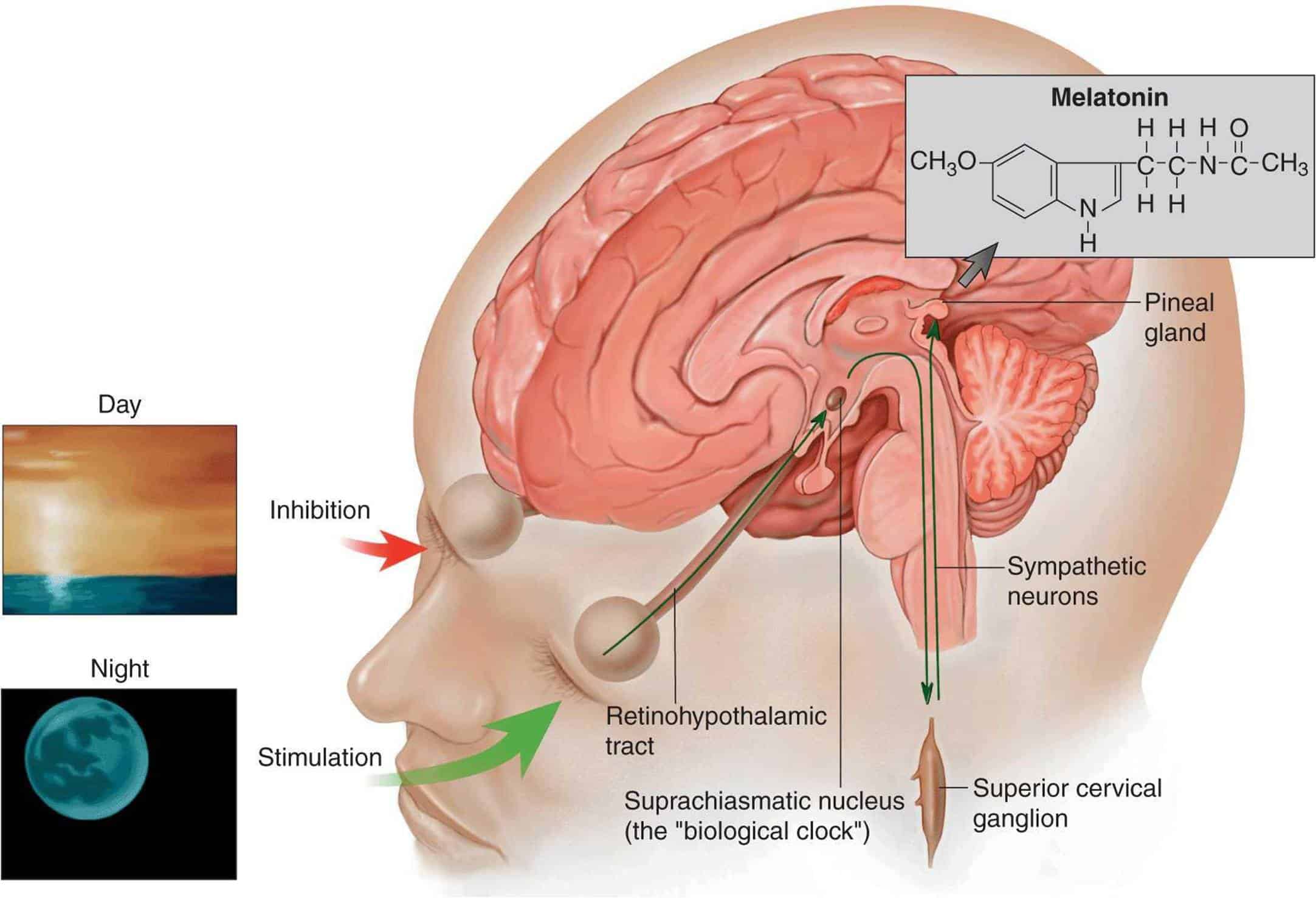 Interestingly enough, even blind people can detect these light-dark cues with eyes shut. These signals travel via the optic nerve to the suprachiasmatic nucleus, which then are used to reset its circadian clock on a daily basis.

Melatonin is quite significant in regulation sleep and other activities in the body.

The suprachiasmatic nucleus regulates melatonin secretion by the pineal gland responding to the environmental light-dark cycle.

Melatonin sends the message of both the time of day and the time of the year to all the body tissues.

It has been recently found that abnormalities in the circadian control of melatonin secretion are linked with sleep disorder related with aging and different degenerative and developmental disorders.

Nevertheless, this does not mean our biological clock absolutely needs light to function. Even in cases we are not exposed in daylight, our circadian cycle still works perfectly as the light-dark cycle is only an external cue. It is of course greatly influential to maintain a balance in the circadian system, whereas artificial lights do not have the same effect. 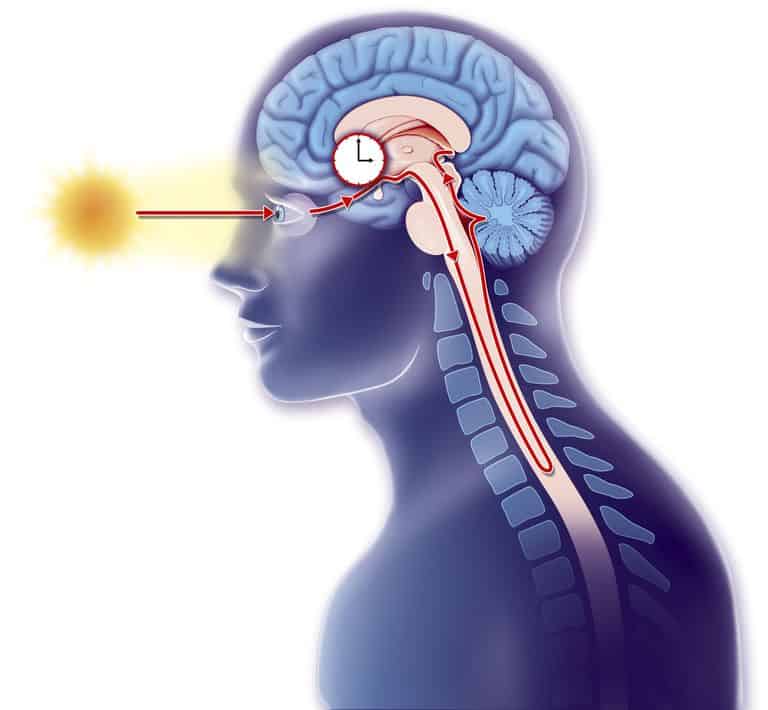 In situations of asynchronous link between the body and the environment, circadian rhythm sleep disorders can occur. In these situations, the sleep and wake patterns of the person are in contrast to the norm.

Thankfully, this is temporary and our body adjusts sooner or later to these changes, most commonly caused from travelling across the globe to a completely different time zone.

There are however other more permanent situations, when irregularities in the circadian rhythms could lead to conditions like:

The causes behind these diseases could be either genetically driven , such as in the case of delayed sleep phase syndrome where there is a circadian misalignment , which could run through the family. In other cases, an injury or degenerative condition could facilitate the development of a circadian disorder.

It could be also that you make the situation worse through certain lifestyle choices such as not maintaining a stable sleep routine, or have insufficient light exposure, for example if you tend to sleep during the day and stay awake at night.

How to survive if your suprachiasmatic nucleus is damaged

If SCN is our master clock, what happens if it “breaks”? Although not talking literally of course, we refer to situations where the central peacemaker of the body is damaged or absent. This can happen in cases of a damage at multiple locations, taking into consideration and the connection between light perception and the SCN.

For instance, in people who are blind and there is total absence of light perception, their clock might not be 24 hour based and can experience desynchronized melatonin and body temperature as well. 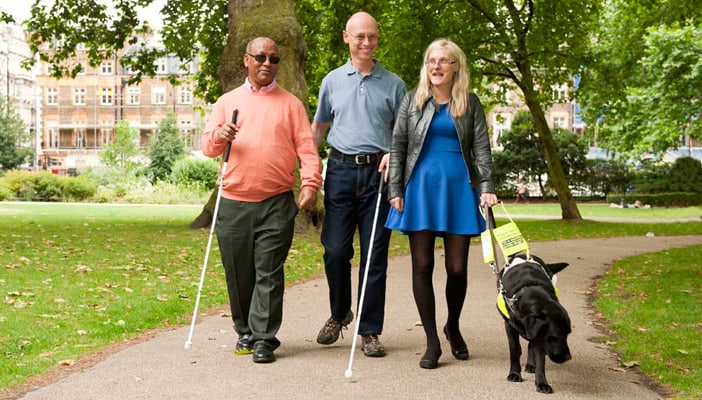 Another situation is if a person suffers from a degenerative condition such as Alzheimer’s disease. In this likelihood, the individual can develop an irregular sleep-wake rhythm.

There is also the chance that a trauma, stroke or a tumor can cause dysfunction on the SCN and interfere with its proper control of sleep-wake cycle.

Based on experiments with mice whose SCN has been removed entirely, it appears that they have no particular habits/pattern with regards to their active time and sleep time, and are inclined towards a sporadic activity regardless if its day or night. It is therefore obvious that the daily cycle of activity is disrupted.

The previous happens because the peripheral clocks in the body lose their director and functions like hormone release, metabolism and several other processes malfunction. It has been suggested that such as situation may lead to the appearance of several diseases.

In such instances of damage in the SCN, the body needs other signals to find time guidance. For example, in the blind, it is essential to prescribe a low dose of melatonin at night.

It is often the case that lifestyle habits like social activities, exercising, eating, and the temperature of the surrounding environment become even more important for internal processes to take place in case your SCN is damaged or malfunctions.

The way our body works internally, is truly a wonder. However, due to the advances of research, we have come to realize many of the body’s functions, including the sleep wake cycle and how it is controlled by an area of the hypothalamus in the brain called suprachiasmatic nucleus.

Whilst we are not scientists, in this post we attempted to provide with an overview of what the suprachiasmatic nucleus (SCN) is and how it functions. It is clear that the SCN controls circadian rhythms, the internal biological clock or circadian peacemaker as it is called. These biological patterns among other functions are close to the Earth’s 24 hour cycle, and help our bodies adjust in day and night, otherwise stated as the sleep-wake cycle.

Hopefully, through this article you have gained a deeper understanding of how the suprachiasmatic nucleus works, its role in sleep-wake cycle through the circadian rhythms and what happens if it is damaged.

It is also important to identify any sleep disorders related to circadian rhythms and deal with the situation early on. There are several effective treatments which can help regulate your master clock and sleep and wake pattern, as long as you seek medical advice.

If you think this article was of interest, we would appreciate it if you took a moment to spread the news with friends and family.

Until next time, take care.